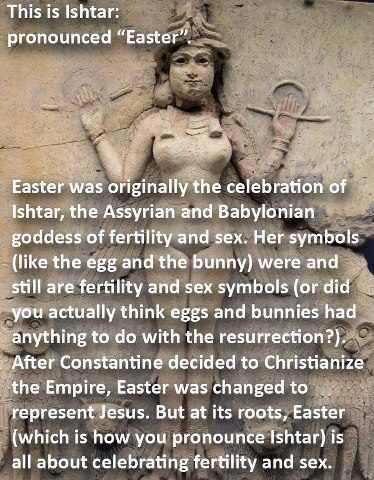 The Easter Bunny has a rather complicated past, one that has reached its zenith in the modern culture of our time. What began as nothing more than an attempt at spiritual fertility and rebirth is now one of the most enduring and popular icons of Easter. In fact, the Easter Bunny is probably one of the most recognizable icons of Easter. His image appears on nearly every gift, item, and commercial during the spring and summer months, and his appearance on our plates and banners is enough to guarantee that no secular religion will be able to take credit for the resurrection of Jesus Christ.

But the true story of the Easter Bunny has a much more Easter-like pedigree. The story begins centuries ago, in an area of Germany called the Saale. There, legend has it, a young woman named Easter married a man named Sweat-eater. Sweat-eater was a glutton, and though he had plenty of good food, he was always hungry. So every year, while she and Sweat-eater were tending to their poor harvest, Sweat-eater would steal some apples from the apple tree and bring them back to their home.

One night, while Easter was in full swing, Sweat-eater went out in search of an apple tree. He went so far away that the neighbors warned him not to return. So, instead of returning, he went into hiding in his apple tree, ate some apples and put the seeds into a carefully chosen sack. And when the next day came, Sweat-eater returned to find that the entire town had been eaten up by the swarms of bugs! But Sweat-eater was undeterred, and he and the apples made their way back to the holy land and fertilized the soil with the seeds that were left.

The legend says that Sweat-eater went on to find another apple tree, but this time, he went in search of a goat. To make matters worse, the entire community was exterminated by a flood that swept the countryside during the dark of night. But Sweat-eater was not finished with his fruit making escapades. He went out once more, this time with an entire army, but once again, disaster struck. This time, a thunderstorm knocked the goats unconscious, and they were swept away into the wilderness.

Sweat-eater was so impressed by the ending result that he decided to tell his tale to other Pagans, telling them about how he had filled his sack with eggs on this day and how all the other Pagans, including King David, ignored him and did nothing to help him. And that, in turn, started the long history of unfairness between Christians and Pagans. But even today, in America, there are still many Christians who look down upon non-Christians (including many Christians themselves).

In fact, the Christian writer John Harrichan relates how the Magi, the Wise Men from Israel who came to worship at Easter, tried to offer the King a cup of water, but he refused. So they resorted to breaking an egg on the ground and giving it to him. Many Christians consider this to be symbolic of egg laying, and so, as it was in ancient times, they associated it with Easter. They also thought that it meant that the eggs were ready to be consumed on that day.

Christians would eventually come to view the Pagan holiday of Easter as a pagan festival. They changed the meaning to suit their needs, but many still view Easter as a day for celebration and fertility. In fact, the spring season is synonymous with fertility and new beginnings for Christians all over the world. It’s a time for giving thanks, praying for forgiveness, and commemorating the gift of creation.

Some Christians view Easter as a time when they are blessed by the Lord. It is a time when the sacrifice of Christ on their behalf makes all things possible, including the coming of the savior. It is, after all, the fulfillment of the Old Testament prediction that God will save his people from their sins. So, while many pagans view Easter as a day of sadness and sorrow, Christians view it as a day of joy and blessing.